Part of an ongoing series in which the HYM Staff whine about Western Washington’s crappy transportation system.

The on-ramp for the 4th Avenue South and Edgar Martinez Drive overpass is stupid. It was meant to solve two problems. The ramp fixed one. But its solution to the second, more important problem was half-ass and made a dozen other stupid problems.

WSDOT finished the on-ramp in 2010. The idea was to allow drivers to access Royal Brougham Way and Edgar Martinez Drive from 4th Avenue South without having to cross the mainline BNSF tracks that run on the east side of Safeco Field. 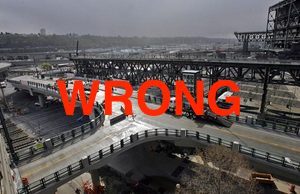 This is a good idea, and it worked. Now, if there is a train in Sodo, you don’t have to drive all the way down to Georgetown and drive across either the 1st or 4th Avenue South bridges to get past a freight train. Good job, guys.

However, WSDOT completely fucked up how it solved the other problem. Between 1999, when Safeco opened, and 2010, when the overpass opened, trains killed four people who had tried to cross the tracks. The overpass was supposed to solve that problem. It did: as far as I know, nobody has died on the tracks since then. Good job, guys.

But, as a piece of pedestrian infrastructure, the overpass is a total failure. It should take about five minutes to walk from the Stadium light rail station to the other side of the train tracks. It’s a distance of two blocks. Instead of five minutes, it takes at least twenty. Way to go, guys.

You know this if you’ve ever taken the train to a Mariners, Seahawks, or Sounders game, or a concert at the WaMu Theater, or the Showbox Sodo, or whatever. The train station is called “Stadium”, but LOL it’s actually a way longer walk, time-wise, from the stadium than the ID Station. I’m sure WSDOT, with its bias against any kind of transportation except cars from outside Seattle, thinks that this is a hilarious joke.

I used to deal with this bullshit every day, because I worked at an office on the block between 1st and Occidental. As the crow flies, the Stadium station was the closest Link stop to my office.

But I’m not a fucking crow, so I had to walk, and I rode to the ID/Chinatown station to get to my office, even it’s way farther away, spatially speaking, than the Stadium station. It was way, way faster, because the King Street Station crossing has two amazing, rarely seen pieces of infrastructure, used by thousands and thousands of commuters every day: an elevator and a set of stairs.

That’s what would solve the problem: a fucking set of stairs.

LOL GOT YOU HIPSTER LIBTARDS, BIKE YOUR ARUGULA IPA BEARD SOMEWHERE ELSE

OK, sure, stairs are ableist, but—guess what—you could build an elevator, too! Just like the elevator at King Street Station! And try using a walker or wheelchair to get up a spiral freeway onramp that’s about 10 fucking miles long. I’ll wait. In fact, I’ll wait a long-ass time, because that’s what it would take.

As the WSDOT spokesperson put it:

“LOL, fuck you people in wheelchairs, because there’s no elevator at the ramp anyway. LOL, you transit-dependent suckers, get up and walk. OH WAIT YOU CAN’T LOL. Buy a car, you fucking communist.”

WHY THIS SUCKS FOR EVERYONE

The policymaking that created this dumb overpass is bad for everyone, for dozens of reasons. I’ll mention just one.

Cars are dangerous to anyone who is not in a car, even if they are alert and on a sidewalk. (That’s why they’re used in terrorist attacks.) People should not be in mortal peril for standing or walking or running on a public street, but they are because our society has been organized around driving cars, and we’re cool with a few thousand deaths here and there so that we can drive two blocks to buy a sandwich or whatever.

When WSDOT and transportation authorities like it design and build projects that privilege drivers over everyone else, they admit that they are willing to accept a certain amount of pointless death in exchange for the privilege of driving. The 4th Ave S. & Royal Brougham overpass is just one example.

Bad infrastructure kills: in 2016, more than 37,000 Americans were killed in car-related accidents. It was (and tends to be) a top 5 cause of death every year. No other developed country is willing to tolerate that level of mass death, because they do not worship cars. It’s just like gun violence.

This problem will not get fixed any time soon. Seattle does not get its fair share of money for necessary projects, because the Legislature likes to stick it to Seattle and doesn’t want to spend money on anything but cars. (See Page 52.) The money and will to fix this problem isn’t going to come back for at least 50 years, when Sodo will be under water anyway.

Good thing Lacey will have a new interchange!