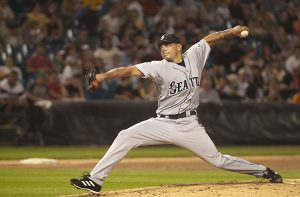 Bobby Madritsch pitched like his life depended on it.

He was a badass. His intensity was such that it frightened his teammates: Ichiro, who is not known for being a chill dude, once had to tell Madritsch to relax.

Here’s the famous story about him, the proof of his intensity: Bobby ditched his independent league team, because he thought the organization and his teammates didn’t take the game seriously enough. Bobby got pulled in the 8th, and out of frustration and determination, he drove from Texas to Pittsburgh to get to a more serious team. With his uniform still on.

Fans and writers valorize that kind of dedication, even if it seems insane. For Bobby, though, it wasn’t crazy. It made all the sense in the world.

That’s because Bobby’s life did depend on pitching, in a sense. Bobby grew up poor, an American Indian kid raised alone by his dad on the far South Side of Chicago, where poverty is no accident. For kids like Bobby—housing insecure, poor, surrounded by addiction —sports is sometimes the only way to get out of the poverty trap.

But Bobby had to work extra hard, because baseball wasn’t looking for him.

Baseball teams used to recruit American kids of color, mostly Black kids, from those circumstances. But they don’t now.

Major league scouting has become financialized. That process has two components. One, teams have embraced risk management. They draft players with low floors and polished skills—i.e. college kids. Two, they enforce cost efficiency across baseball operations. That means less spending on expensive traveling scouts and more on statistical modeling, which requires less labor and overhead. That trend has progressed across sports.

Major League scouting departments send the area scouts they do still employ towards traveling teams and fancy suburban high school leagues. Stats-oriented scouting reinforces that bias towards whiter, richer suburban leagues. Record keeping and video scouting in inner city sports leagues is worse than in districts with higher athletic budgets. Browner, poorer schools don’t have money for uniforms, let alone a video and stats assistant. To save money, teams spend the high-risk slices of their scouting portfolio in the cheaper Caribbean, where the money goes further. Desperate, toolsy prospects are a dime a dozen in the D.R. and Venezuela.

Those trends started in the ‘90s and accelerated in the Aughts, when Bobby was a prospect. So he didn’t get noticed during high school: Bobby didn’t get drafted until he was 22, in the sixth round, after a few years of community college.

Maybe teams didn’t take him seriously because of his prospect pedigree. He had to prove himself above and beyond other prospects, even though he was a big, strong lefty who could bring it up to the mid 90s. He threw a cutter, a change, and a nice slider. He had pitchability, solid command, great makeup.

Bobby had good numbers, too: 9.5 K/9, and a strikeout to walk ratio well above 2 in his age 24 season, across A ball and rookie league. Sure, he gave up a few dingers, but it’s not like the Reds had great pitching in the ‘00s. Despite the decent to good results, Bobby got cut after just two seasons in the Reds’ system.

Bobby had to grind again, and he went to independent ball. He knew he was good enough for the show, but to his frustration, he was surrounded by the screw ups, has bens, and never weres of the independent leagues. Finally, the M’s scouted and signed him, and gave him a more than earned shot at the high minors.

Bobby and the dumpster fire rotation

As you might recall, the Mariners didn’t have a ton of great pitching in the mid Aughts. (Or since.) Bobby was one of the few bright spots on a 2004 team that saw the bottom fall out all at once. In fact, he was one of the organization’s few decent pitchers near the top of the system.

In 2004, the M’s called up pretty much everyone they had in AA and AAA at the time, and Bobby was one of the only guys to flourish. But he won my heart because, unlike some of the overpaid, mediocre, and entitled veterans that cashed checks on that ‘04 team, Bobby clearly wanted to be there.

He wanted it badly. He tried as hard as anybody else on the team. And he succeeded. He was solid in the pen in July. Meanwhile, the rotation was a dumpster fire. Ace Freddy Garcia had been traded to the White Sox in a deadline deal. Jamie Moyer was getting shelled, and perennial disappointments Joel Pineiro and Gil Meche regressed to even deeper levels of disappointment than usual. (I’m not going to mention the other guy by name.)

So, in August, Bob Melvin gave Madritsch a rotation spot. He grabbed a tight hold of it: Bobby made 11 starts for the M’s, and pitched seven or more innings in all but two of them. He notched a 3.39 FIP, 6.1 SO/9, 1.82 SO/W. He even cured his dingeritis with a maybe unsustainable 0.3 HR/9.

Bobby was good in August and excellent in September. He threw eight shutout innings against the fearsome Red Sox, who were soon to win the wild card and, in an underreported story, break some curse. Bobby helped ruin the A’s season with a complete game win on September 29; the A’s finished their season one game back of the AL West-winning Angels four games later.

The wrong gamers get paid

Bobby earned his place as a reliable mid rotation starter—maybe more—as part of the next good Mariners team. In a perfect world, Bobby would have helped to prevent the cycle of mediocrity alongside Adam Jones and Shin-Soo Choo, and he could have gotten the big contract that would help him escape the poverty trap. (Jones and Choo got traded before they broke into the majors, and became All Stars elsewhere.)

But the world isn’t perfect. Bobby didn’t get the contract, because his shoulder tendons got shredded. He did himself in with all those starts, all those innings with max effort and intensity, all the heart that he needed to use to escape independent baseball, community college, and the South Side.

So Bobby got cut by the Mariners, this time because of the cruel meritocracy of major league sports: he couldn’t bring the gas he like he used to. Bobby washed out of baseball after getting roughed up in the Royals’ minor league system over the course of 2005.

Bobby’s grit, his heart, was genuine. Often, a single-minded dedication to baseball, and the toughness needed to follow it, is a performance. Guys like Paul O’Neill become the idol of a certain type of typically male, typically white fan, the kind of person who valorizes fistfights and playing hurt. They’re what commentators visualize when they tell football players to stop kneeling, or basketball players to shut up and dribble: white, buttoned-up, “tough.”

Guys like O’Neill and Bret Boone embrace that persona and its politics, even though it’s just a recipe for ritualized self harm, and a vessel for emotional and spiritual emptiness. The end result of the “warrior” mentality is a massive void at retirement, a yawning pit of substance abuse and depression; a loss of purpose and meaning leading to an empty, but materially rich, life.

Bobby was a gamer—a real one—but he didn’t get the contract. If anyone deserved wealth and success, it was him. Every strikeout meant something. Each pitch was a rebuke to the scouts that ignored him, or decided against the evidence that he wasn’t good enough. Bobby Madritsch was the real deal, unlike those coddled “warriors” with decades-long major league careers.

In 2012, Jeff Sullivan reported that Bobby was back on the South Side. Madritsch was coaching a youth baseball team, using all that grit and focus. He was helping poor boys of color from the South Side earn the contract that an unjust world stole from him.