After a helluva week/month/year, sometimes you just need something to reaffirm your faith in humanity. To warm your heart and help you look forward to a brighter future. To show you that despite the chaos publicly and personally, the world remains right and humanity persists.

After last year’s epic Nickelback versus Slipknot feud in which the ever eloquent Corey Taylor described Chad Kroeger (don’t make me remind you) as having a “face like a foot”– to the delight of Me everywhere– 2018 has brought us even fresher beef.

PREPARE FOR A HOT BEEF INJECTION

The good folks at Stereogum have the whole deal laid out here. The basic story is that the two ran into each other at an airport, Borland was rollin’, rollin’ rollin'(sorrynotsorry) on a golf cart and that didn’t impress Lewis, and they argued about whether or not Borland was from Jacksonville or something like that and 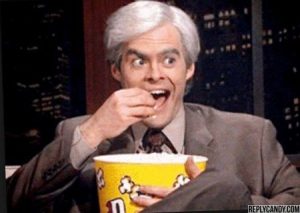 THIS IS NOT THE FIRST “HEAVY” METAL BEEF

but it may be the best. Because the best thing when there are celebrity beefs is for the only winners to be us.

And Nu Metal beefs are the best beefs because I don’t care, and it’s also likely these guys have guns and would actually fight each other, unlike all the indie rock snowflakey beefs that pretend to matter.

But the important thing to remember, is that Aaron Lewis cares a lot about whether or not Wes Borland refers to Jacksonville as his home, and that they are fighting on the internet and that it brings us all a lot of joy.