You’ve been waiting for this, so here it is.

The top four most powerful fast food locations in Seattle. This list is scientific, objective, and infallible. Refresh yourself on the criteria and behold the truth. If you disagree with us, you are wrong, but you can let us know on this one evil website. 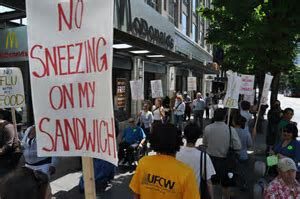 On a corner and block that seems perpetually on the edge of chaossing out into space, this McDonalds provides an anchor. Many a time, between Capitol Hill and my South End landing spots has this McDonald’s provided ballast for my swaying ship. This spot is often maligned, as if it’s some sort of a problem, and I, for one couldn’t disagree more.

Solid fast food, a spacious dining room with lots of room to sit, stare into space, sip cola. Plus functional restrooms in an area of town that needs them. Badly; downtown Seattle has tons of people and precious few spots for them to use the restroom.

While this McDonalds is not the same sort of community hub that the now-bulldozed First Hill McDonalds (may it rest in peace), it does provide cheap food and a place to sit. Both are things that downtown Seattle could use more of, especially in tandem. There are plenthy of 7/11s or food trucks, but outside Westlake Mall, this one of the few spots you can get a meal for under $1o and sit down while you eat it.

And for all the haters who talk about “unsavory elements:”
1) we’ll unpack the very classist/racist undertones of that sentiment some other time, and
2) no one’s ever offered to sell me a secondhand Big Mac outside that McDonalds, which is not my experience with the phone store just down the street. I never read people complaining about the presence of a T Mobile or Verizon store.

There’s an element of desperation to the entire block, and I would counter that the McDonald’s is what saves it, with deliciously prepared Big Mac and “milk” shakes. I have been, and will be grateful for it many times.

Panda Express is to Authentic Chinese Food as Taco Bell is to Mexican Food. Let’s just get that out of the way. But hey– Pandas! Everyone loves Pandas. Still, the food is cheap, quick and you get more of it for the same price than you do at most fast food places.

The PE on Lake City Way is notable largely for the way it serves as an anchor to LCW’s business strip. Where most neighborhood business associations in Seattle pride themselves on flagship local breweries, coffee shops or upscale yoga studios, Lake City has doubled down on chain stores and fast food. This can be a little depressing; on the whole I prefer local to national, for reasons ethical, aesthetic, and contrary.

But an interesting side result is that, in a neighborhood that frequently struggles to keep businesses open on its main strip, is that the two man corners’ anchor tenants remain steady. This lack of immediate cool also has helped forestall gentrification. Inasmuch as any non-residential neighborhood in Seattle has remained Itself, Lake City has.

So skip the Subway across the street, it’s horrible garbage food that’s trying to tell you it’s healthy. Instead get yourself a greasy, fake, but totally edible bowl with two sides and some rice at Panda, then spill it all over yourself as you explore Lake City’s three walkable business blocks. After all, it’s not going anywhere. 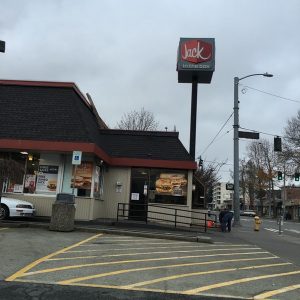 I have visited this Jack in the Box in various states of intoxication after taking in shows at the Kraken, which is a few blocks up the Ave from here, or hanging out with friends who live in the U District. They are not especially memorable occasions: there is not really any good reason to go here, because there are probably 100 better places nearby at which you can get food at any hour, including Shawarma King.

The only things I remember about the last visit I made here, which was probably in 2014, was that the curly fries were cold and soggy—very disappointing. Curly fries should be a beautiful thing, but these were not. The tacos were gross, as always.

However: this Jack in the Box location is less a fast food restaurant, and more the site of the North End’s most significant open-air drug market.

A close friend of mine used to live on 15th and 51st (or somewhere thereabouts) and he bought all his weed, pre-legalization, from the kids and more adult (and shady) dealers that hang on this stretch of the Ave.

We went over here one time and bought a dime bag. We went back to his apartment and smoked out of his bong and listened to a Whitesnake record he’d gotten out of a dollar bin that month. The weed wasn’t that great. Neither was the Whitesnake—we switched to Creedence after the first side was done. (Ed. note: “There’s a reason they were going again on their own”)

My friend continued to buy weed in front of this Jack in the Box even after I introduced him to my apartment-based dealer. He even kept going to the Ave for a year or so after weed got legalized, though he moved to Ballard around then, and his change of habit might be more about that. While he was still going to the Ave, he said he liked the thrill.

The dealers still hang out there, but there aren’t as many as there used to be. 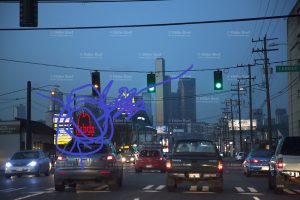 THEY HAVE THE MEATS.