What is the most powerful fast food location in Seattle?

This is a complicated question. You might think you know. BUT YOU DON’T. Fortunately for you, we know the right answer.

The huge staff of How’s Your Morale? has taken great pains to SCIENTIFICALLY and METHODICALLY select the finest FAST FOOD LOCATIONS in Seattle. We used scads of data, mountains of research, oceans of numbers, acres of clams, and a metric fuckton of really good judgment to figure this out.

Every ranked fast food location must be:

The review is also limited only to the location itself. That means McDonald’s vs. McDonalds. Jack in the Box squaring off against the other Jack in town. (That sounds kind of dirty.) Also, it precludes your McDonalds vs. Burger King takes, because we don’t have time for that nonsense. (Mickey D’s is better, though, obviously.)

These factors will be summed into a total score, which scientifically determines the location’s ranking.

The above Street View picture is inaccurate: the Rainier Beach McDonald’s no longer features the classic sloped roof, immortalized in the Pizza Hut logo, that used to be the architectural signifier for fast food in the ‘90s.

Just weeks after this picture was taken, this location closed for two weeks while contractors installed LCD displays and new seating. (The new benches have stylish (?) belts that buckle the cushions but don’t actually hold anything in place. It’s an interesting design choice.) Every surface is now covered with the fake hardwood (I assume it is actually polymer or plastic) that you see in the cheaper condos and apartments now being constructed across the city.

The McDonalds has adapted to the condos, which is to say that the Rainier Beach McDonald’s is gentrified. It’s hard to say whether it’s welcoming gentrifiers or reacting to their presence—I’ve heard both arguments in regards to the character of Rainier Beach, and the Valley in general—but it is certainly ready for a clientele that probably will not visit, except in secret shame, when they have tired of their organic CSA beets.

They will groan in theatrical disgust when their friends mention the chain, and decry the deplorable impact of McDonald’s sourcing on the soil quality and water table of the places where its steroidal cows are raised and slaughtered in utmost cruelty and also pump tons upon gallons of farts filled with greenhouse methane gas into the atmosphere, leading to our species’ early demise.

I do not feel a shred of shame or remorse when I eat McDonald’s. (Actually, remorse sometimes comes, about a half hour after I eat, but that’s for, uh, different reasons.) I am a gentrifier of Rainier Beach, but I like to think that I am different than the beet-eaters.*

I am an evangelist for all day breakfast. I mourn the end of the #2 2 cheeseburger value meal, [ed note: this deal is not gone, but renumbered, so apparently the writer is an idiot] which was the greatest of all fast food bargains. Now I get a Big Mac instead, though I’m probably going to switch to a Junior Mac, or whatever the hell it’s called—the bun in the middle of the Big Mac is bullshit. That’s why the Dick’s Deluxe is everything the Big Mac wants to but will never be. It has no bun in the middle. And tartar sauce. (Just because you can’t talk about Dick’s in this article doesn’t mean that we can’t.)

See? I’m actually from here. So I’m a better gentrifier than those other white people.**

*I eat beets occasionally, but I am not a member of a CSA. 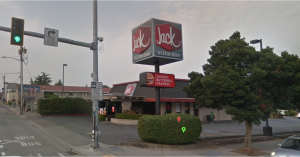 I have driven by this Jack in the Box hundreds of times, but I have only dined there in a moment of desperation.

I was out drinking past closing time with some buddies in Greenwood one night. I’d given a couple buddies a ride to the strip around Greenwood ave and 85th, where I’d parked overnight, with the plan of splitting an Uber ride home with said buddies. (This was before we all decided Uber was bad, OK?)

One of my friends left his coat in my car. I asked him if he wanted to take it with him; I was closing up shop for the evening. This friend also has a tendency to forget things.

“No, Pete,” he said with no small amount of snark, “I left it there on purpose.”

Thus chastened, I let the matter drop. We went to the bars, drank too many drinks, and I split an Uber home with the same buddy. When I got home to Seward Park at about 3:30 AM, I noticed that I had text messages and multiple missed calls from this friend.

Turned out he had left his keys in his coat in my car.

I had to work the next day at 12:30, but obviously my buddy needed his keys, and my girlfriend had to take me in her car to Greenwood, brutally hung over, several hours before she or I had even intended to wake up. During the drive, I cursed this friend’s name—indeed, I wondered whether he was a friend at all. (We are still friends. A year after this event, he was one of my groomsmen when I married the girlfriend in question.)

I was extremely hungry when I retrieved my car, and my friend’s keys, and I was in a hurry to get to work at my coffee shop, where my friend would in turn pick up his keys so that he could close the coffee shop where he worked. I got a Sourdough Jack. It was fine; the curly fries were fresh, but not too hot. I had a Sprite, because my girlfriend had told me that it was the best thing for hangovers. It tasted like Sprite, so it was fine.

This Jack in the Box actually saved my life. For its service, in my moment of greatest need, I will be forever grateful.

Ah, Wendy’s. At third-most popular amongst the national Burger Chains, it neither exudes the bland, ubiquitous dominance of McDonalds, nor the try-hard promotional energy of Burger King; yet it doesn’t enjoy the cult love of regional staples like In and Out, Dicks or the now-national Sonic. Perhaps it was this generic Americana that led Joe Wenderoth, experimental writer, to create his opus of poetry and absurdist prose “Letters to Wendy’s.”

The concept being that he sat in Wendy’s every day for a year and wrote a poem on the comment cards. How he saved his work I’m uncertain of; one would like to believe he left his increasingly weird musings for the beleaguered staff. Maybe he took a picture of each card before dropping it. It was the ‘90s. Who knows how anyone did anything back then.

I can’t recommend this book in good conscience without also including a massive Content Warning, as the all-Wendy’s diet  combined with the cocktails of drugs and alcohol he found himself under the influence of produced some truly disgusting writing. But it has cemented Wendy’s in my mind as the near-hallucinatory, semi-pornographic fast food place of choice. So while I’ve never plumbed the depths of Wenderothian depravity, if I do it in a fast food place, it’ll be Wendy’s.

The one in Ballard is fine. They have Salads. They have Biggies. They remodeled.

The words Crunchwrap Supreme rarely sound– or feel– as good in one’s mouth as after a band practice. After a few beers, some hollering, pounding on keys or bass strangulations. Embodying both hard and soft mouth sounds, the only thing better than saying “Crunch wrap supreme” is eating one, when you are hungry, or just craving that enticing mix of synthetic and actual food and spices that Taco Bell provides. Indeed, I’ve eaten at this  Taco Bell when I was starving, and when, honestly, I wasn’t hungry at all. And all the time it was delicious!

I don’t know what makes this one better than, say, the one in the north end, or better (barely) than the one in Rainier Beach. Perhaps it’s because, being in SODO, it is frequently subject of a quest by those hungry, drunk or hungover, and the staff, being frequently all  of those things (sometimes at once) rises to the occasion.

Maybe business is slightly sparser, allowing for a slightly cleaner work environment. Maybe there’s some strange osmosis whereby it soaks in the post-industrial-loft-party-cool that SODO provides. Or maybe it’s me. But either way, there IS a difference between Taco Bells, and if you can only run for one border, run for the one in SODO.