I’m sitting on the bus, in the elevated back section, going to a lunchtime meeting downtown. The bus is pretty full. I’m reading, so I do not have headphones on. Someone is listening to a YouTube video on their phone, loudly, without headphones.

I gradually begin to notice the video. My brain fixates on the YouTube audio. Maybe the listener turns up the volume. The person watching the video—I can’t quite figure out who it is, not wanting to stare, but it seems to be a young black woman—maybe turns up the volume. I think about asking her to put on headphones, but that is a very bad mistake on buses. The other ten-ish people, mostly black but with one or two other white people beside me, within earshot make the same calculation.

The video sounds like it is being read by Siri.

It is a communist propaganda video.

The video takes the form of a Q&A. The Siri narrator, who might be a real person? I really can’t tell, is answering straw-man type questions, like “But what about the need for incentives?” “But doesn’t capitalism work better?” etc.

There are two etiquette problems:

This point is ambiguous: young people, particularly young black people, have always played audio in the back of buses without the consent of other passengers. That act can be annoying in a material sense, but it is something people do and not worth getting bent out of shape over.

I have seen one or two people (the complainants), usually a white person power tripping and assuming that their cultural norms must be applied to everyone even they (the music listener of color) rides the route in question often and out of necessity and is simply trying to make themselves (the music listener of color) comfortable and assert their right to exist in public spaces (see Raheem, Radio,) and that shit never ends well.

Usually the only thing that results from a confrontation here is a shouting match, hurt feelings, and louder audio volume, which is just not good for anyone.

Playing Marxist propaganda at a loud volume in Little Saigon is very rude. 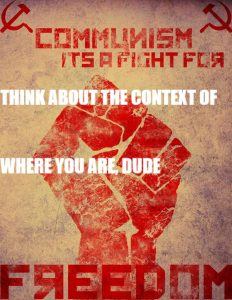 A middle aged white man is standing in the stall. Its door is open. The man is holding his phone in his hand. He is talking, seemingly into it. The man walks to the sink and turns on the water. Someone talks out of his phone, on the speaker. He washes his hands and leaves.

While all this is happening, the man is talking into his fucking phone, but the phone is not on his fucking face, so he is on speaker as he is fucking flushing, and probably while he was God damn peeing, and he is talking to someone while he is fucking doing his business, which is confirmed by the fact that the person on the other end of the line talks to him on speaker for all to hear while he is washing his hands, and he doesn’t have the God damn decency and respect for others to put the phone on his face and pretend like he is not pissing, even to the other asshole who is apparently OK with this fucking horror show, and at the very least friends with this asshole because they’re apparently intimate enough to talk while one of them is taking a dump or whatever, which is fucking disgusting, and it’s without any God damn question why we have Trump. 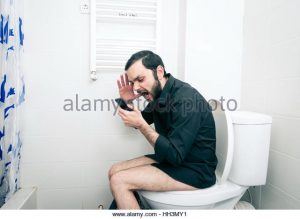