One might say it’s lower than the Seahawks’ after Superbowl XLIX.  Lower than the city of Seattle’s average Vitamin D intake.  Lower than the 2012 Mariners’ Attendance.  As an avid reader of your site, I was delighted to see your latest post in which you #PowerRank the Best Types of Iced Coffee.

“Nice call.”  I thought to myself.  “Lists and rankings are always compelling, important, and, most of all, original.  I can’t wait to read this fresh article from a media source that I have grown to respect and trust.”  I clicked on the link (you’re welcome for the metric) and was immediately sucker-punched by an unsolicited attack on the patron saint of New England: Dunkin’ Donuts Iced Coffee.

As I read further I was shocked to find that Dunkin’ finished dead last in your rankings, behind even the penultimate “Old Room Temperature Coffee,” or as red-blooded Americans like to call it as they work from home, “Coffee.”  Adding literal insult to injury, Dunkin’ received a score of -1,000,000/10 (feels so impartial) and the article went so far as to plainly state that Dunkin’ Iced Coffee “sucks.”

As our founding fathers atop Bunker Hill before me, so too do I cry out today: shots fired!

Let’s discuss the state of things.  A once proud local-turned-regional chain known for quality coffee spreads itself too thin too fast. They start to roll out more and more specialty food items and shift their focus away from good coffee at a fair price to fancier more “high end” beverages for their customers.  As a result the product suffers, and, with it, so does the consumer. Sound familiar? Say it with me friends: Starbucks. Pot meet kettle. 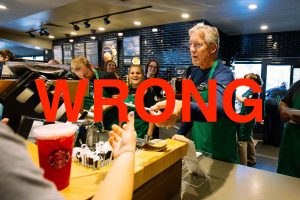 How quickly one loses touch as they ride around in their Subaru.  Typing away on their Chromebook, socks stuffed firmly into their sandals, wondering if the latest Amazon drone will be able to reach them for a delivery way up on their high horse.  If you want to cast aspersions on Dunkin’ for a drop in quality then to you, sirs, I say: fair enough.

I would simply caution those in glass houses to not throw grungy rocks, especially when your entire city is stoned.  We New Englanders don’t want a tall, we don’t want a grande, and we don’t want a venti. We want a small, medium, large, and WICKED LAHGE with five creams and 43 SUGAHS.

And this brings me to the real crux of the issue at hand.  Let me let you left coast elites in on a little secret. We here on the actual best coast don’t like Dunkin’ either.  We think it’s fahkin’ awful dude. But taste isn’t the point. The point is not that it’s good, it’s that it’s ours.

We New Englanders love to suffer.  Why else do we live where the air hurts our face more than half the year?  Where it snows so much that they have to start dumping it into the friggin’ ocean?  Our largest road hazards are not our fellow motorists, but massive beasts that survived the original Ice Age.  Their eyes don’t reflect the light. Their eyes don’t reflect the light?!  From Bangor (I hardly know ‘er) out to Chatham, Down East (Ayuh) to Narragansett.  Burlington, to Bow, to Brockton (No, Connecticut. You’ve made your bed complete with I <3 NY sheets.  Now lie in it.)

New England runs on Dunkin’ not because we enjoy it, but precisely because we don’t.

Learn to drive your Subaru

So, my Seattle-based friends, think about this the next time you’re playing patty-cake at a four way stop trying to outdo one another at yielding the right of way.  (For the love of 1996 A-Rod it goes to the right!) If I can slog my way through a large Dunkin’ before the clock hits 8:00am then I won’t be phased by Cape traffic, the likely impending blizzard, or the ensuing 45 minutes spent shoveling out my car (or as we like to call it, cardio.)  We are New Englanders.

Mass-Holes, Maineiacs, Rhode Islanders, Vermonsters, New Hampshireites.  We are loud, proud, and happen to be located at the epicenter of the sporting universe.  When it’s sunny out, we reach for an iced Dunkin’. We wouldn’t expect you to understand.

Sam Carter is a true patriot, native son of Maine, and adopted Mass-Hole. When he isn’t witnessing his regional teams lift championship trophies, he enjoys sitting in Pike traffic, skiing the east, and a nice bowl a chowdah. Like his state motto, so too is he Open For Business. Please follow and endorse him on LinkedIn.

View all posts by Guest