Few naturally (and occasionally unnaturally) occurring weather phenomena evoke the mix of calm, beauty, and dread that a thick layer of fog does. Whether in the countryside, city, or suburbs, fog creates mood in ways that simple rain or shine does not. The last couple days has seen Seattle getting it’s Northwest Winter on with vision obscuring low lying clouds. If you’re one of those Northwest folks who actually kind of likes– or at least knows how to navigate– the grey, it’s been pretty cool.

It’s also resulted in downtown looking like a ghost city. 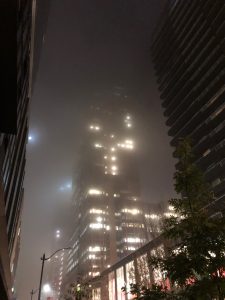 Not as in being a “ghost town,” like no one’s there– there’s definitely something there. But it doesn’t feel like people. 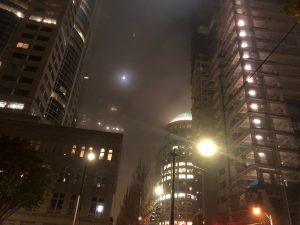 The tops of buildings disappear in this level of fog, lending to a Ridley Scott-esque sense of a city in the clouds. Which I guess it quite literally is. 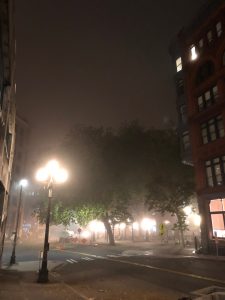 Everything seems just a bit more momentous. Or a bit more ominous. Or a bit more like a holiday special. Or a small town that gets overrun by ghost pirates in one of the more singularly creepy films I watched and re watched in my teens around Halloween. If you haven’t seen it, watch it. John Carpenter is at the top of his game in that outing. It also may be the reason that I lean toward the “otherworldly” and “ominous” side when interpreting fog. 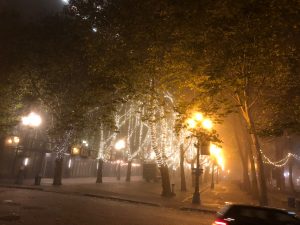 Pioneer Square, especially, shines in the fog, in part because of the old buildings, in part because of the year-round Christmas-ish lights in Occidental Park. As I wandered my way home, it felt like  I was in an alternate dimension version of my neighborhood, one where the fantastic is possible. The sense of dread subsided into a small sense of wonder, even something approaching gratitude.

Whatever is out there didn’t get me this time. And let’s be real, it’s probably goblins.