Not all bodegas are created equal. Some convenience stores are much better than others, and they gain a certain reputation even outside their neighborhood.

Not every bodega can hope to become legends like the Quick Pack at MLK & Jackson, which is renowned for its fried chicken, or the Shell on Beacon & 15th Avenue South, which has surprisingly credible fish n’ chips, or City Market, the bodega/grocery at Bellevue & Olive, which has truly great breakfast sandwiches that feature Jimmy Dean breakfast sausage patties and American cheese.

Here’s my thesis: sometimes you might consider going to a convenience store that is not, in fact, quite as convenient location-wise as a rival store much closer to your location. A bodega that can get you to work a little harder must have some exceptional version of the following, and cannot be a Cone and Steiner:

This is the best way to stand out. After all, the all-star team that I mentioned above are all most notable because of their food offerings.

However, there are pitfalls to this approach. Gas station food is usually bad, because preparing and hot holding good food is expensive and labor intensive. When I brought up gas station food, you probably thought of hot dogs under heat lamps on rollers who have been there for God knows how long. 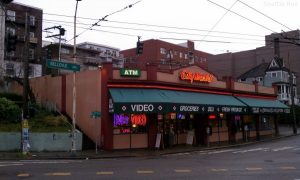 The key for great gas station/bodega/convenience store food is that someone has to be looking after it. Usually, a great bodega food operation will have a worker separate from the clerk, someone who will prepare sandwiches/fry drumsticks/batter fish/roll burritos.

Other examples in this category apart from the above include Thomas Street Market, at the corner of Summit and Thomas, which has a reputable sandwich operation, and the place at 21st and Union, which has legitimate teriyaki. Certain 7 Elevens hold this down as well. All 7 Elevens have quality, cheap sandwiches, and some of them actually have workers who throw out too-old hot dogs/taquitos/pizza.

I am not talking about craft beers. Some people in this day and age think they should be able to get their favorite hoppy IPA anywhere, and those people are wrong.

The quality of a craft beer’s flavor is super subjective and, oh, unless you forgot, YOU’RE AT A DAMN GAS STATION. Everything on this list is a bonus. You can complain if you can’t find a Steel Reserve bomber and some Funions, but I really don’t care if Stone Gossard’s Hoppy Piss isn’t available. Seriously—if you’re complaining about the craft beer selection at a gas station (or anywhere, TBH), you can get fucked.

Anyway, a good bodega should have a wide variety of macrobrews. I want a full selection of watery domestics. Most places have Coors Light, but not all of them have Coors Banquet. Some places have Pabst, but not Rainier, which honestly is just like putting up a sign that says “Seattle, I don’t want your money.”

Again, I want the full spread here: I don’t want to be limited to Frito-Lay. Places ought to have some more upbrow and/or local offerings, like a Tim’s Cascade or Kettle Chips. Pringles are a strong offering. So are Ruffles, since they’re great for dipping. On that score: have some queso, bean dip, and onion dip around. It’s in cans and jars and preserved to high heaven, so you really don’t have any excuses if you don’t.

Also, I have some dried bodega meats from time to time. Gas station charcuterie should include Oberto jerky (Jack Links can get fucked) and pep sticks, maybe something from Tillamook Smoker, and Slim Jims. Maybe Summer Sausage if you’re lucky.

Candy is key, too. You can’t just be Hershey or Mars exclusive. Sometimes I want a Twix AND a Baby Ruth. I don’t think it’s unreasonable to want to make my pre-movie candy run a one stop operation.

A+ bonus points if you have unexpired bacon and eggs in a fridge somewhere. Frozen pizza is a winner, too. Sometimes it’s late, everywhere is closed, and you’re ungodly hungry, and chips and beef jerky just won’t cut it.

Just mop the floors, dust the shelves, and change the light bulbs when necessary. I ask this, and no more.

When it’s 2:42 AM and you’re high and you walked through the dark to a place of bounty, you don’t need any help convincing yourself you’re one wrong move from getting dead. Please don’t help addled brains along the way.

Also, don’t talk to your customers unless absolutely necessary. (There’s a decent chance that the person you’re talking to just did something they are deeply ashamed of.) That shit is stressful and we are definitely not here to make friends.

We are in your bodega, and we are on a mission.