Today, a developer from Vancouver filed permits to demolish the Showbox and build luxury apartments on its site. This has to be the most blatant, literal example of the negative effects of the boom on Seattle’s culture. To me, it feels like a sick joke.

The Showbox is, in my opinion, Seattle’s best room for music. It’s reasonably large, with an 1,100 capacity, but it’s still intimate. There are big chandeliers, and mirrors on the wall. The columns are art deco lotuses. You can sit at tables. Or, more likely, you take in the show on the hardwood floors. 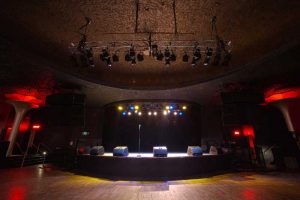 The floors are important. The floors, made of a hardwood—cedar or pine, probably—were made for dancing. When the Showbox opened, in 1939—the 79th anniversary of the place was yesterday, by the way—it was the grandest, biggest room in town. Some people thought it was too big to succeed. But crowds came and danced.

Integrated crowds came and danced. Integrated bands played for them, and the brilliant Black innovators of the time, including Duke and Satchmo.  The Showbox, and the Jackson Street nightclubs that it emulated and surpassed, were just about the only parts of the city where white people and people of color mixed. That scene kept Seattle going through World War II, and bequeathed Ray Charles and Quincy Jones. Quincy bought his first horn in the basement of the Showbox, by the way. The Showbox features often in the remarkable photos that local Black photographer Al Smith took of the period—there’s an exhibit of his work at MOHAI. You really should go see it, to really understand how much the Showbox means.

So many famous acts played important sets at the Showbox. Bands routinely pick the Showbox over Neumos, the Croc, or the Neptune because it’s special. Pavement recorded the concert video of their final tour at the Showbox. Prince played his last show in Seattle there.

But the meaning of the Showbox is even more immediate than that. It was the place that every act in Seattle wanted to play. If you were on the grind for years, playing every bar and club in town, but finally hit the road and played good venues, coming back and playing the last, homecoming show of the tour at the Showbox meant the most. It meant that you mattered, that people thought your music mattered.

That’s why the city’s favorite acts did album releases there, why Blue Scholars triumphantly booked shows there for three nights in a row. Local legends like Murder City Devils and Blood Brothers played their last shows there. Minus the Bear is doing the same thing later this year. there. Soundgarden played their first reunion show there.

If the Showbox goes away, then our music scene really will be gone.