For this edition of power rankings, we will look at the top four (of six) times I rode the 512 in the week of April 21-28 to participate in the wedding ceremony of a friend. I was standing as groomsman, but wasn’t best man, so my responsibility basically consisted of showing up to the various preparatory things. The wedding was in Everett, which meant I could take the conveniently located 512 Sound Transit bus to and from Everett Station.

Said bus stops at the following locales once leaving downtown: U District, 145th, Mountlake Terrace, Lynnwood, Ash Way/Newberry Court, South Everett, Broadway, and finally, the Everett Transit Center. People get on and off at every stop, but in general, the Lynwood, Seattle, and Everett stops seem to be most busy. It usually takes between fifty minutes and an hour and fifteen. It’s an ideal ride to zone out, read, or sleep.

I rode a total of six times. Here are the top four most powerful trips, ranked by ease of trip, incident level, and quality of bus nap. 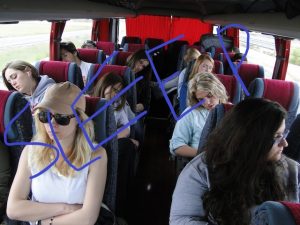 One well-documented fact about life in the Northwest is that Traffic Sucks. Coffee, Rain, Bad Traffic. But, as a walker and rider of transit, I don’t viscerally experience it on the regular.
This bus ride, at one hour and forty five minutes from start to finish, was a visceral experience.

The lurch and stop, especially up by Northgate, and again through Lynnwood, caused a vague simulacrum of seasickness. The moments we simply sat on I-5 in the void between Mill Creek and South Everett caused bubbling panic. I’d set aside two hours, fortunately, so I wasn’t late for my rehearsal dinner, but there was zero chill.

Especially since the guy behind me was apparently fighting some horrible disease that caused him to have to clear his throat and growl every five minutes. Like so: hhhheeeuuuurgh. Errrrgh. Culcccchhhhhhhh. Hwwwat.

This ride was uneventful, save for the fact that I’d overslept my alarm, and had to transition from sleep to bus-riding in record time. This meant no shower or anything, which is kinda rank when you’re getting fitted for a tuxedo by a kindly Russian in South Everett. It must have been a pretty good suit, because I would argue I still looked handsome.

There was a disgruntled youth in the back playing metal, either very quietly on their phone speakers, or extremely loudly in their headphones. Either way, it qualified as poor phone ettiquette, but either way, it also didn’t really matter. 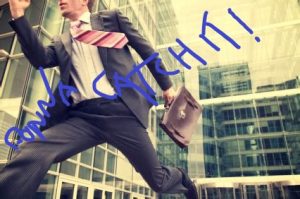 The wedding was a success! Ryan and Melissa are married now! Fun was had, people were seen, and I did a damn good job of walking down an aisle and standing in a place. This ride was significant, because it was the last one in this series, with no plans to leave town via 512 for a hot minute.

And The Ride That Takes You Home Is Always Significant… that’s what I’m putting on my transit-related series of hallmark cards. I also slept like a baby, and that didn’t lead to any problems, unlike with #1. . .

After getting suited up, and confirming that, yes, I remembered when the other things would be happening, and I would be there in a timely and showered fashion, I hugged the groom, thanked him for picking me up, and decided to wander around downtown Everett. 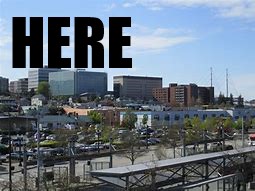 Downtown Everett is a delightful place to live, work, and play for a while. This involved lots of looking at water, considering going into places and deciding against it, texting my pals who live in Everett to come hang out, and sending pictures to friends and Instagram.

Also, cheap burgers and $2 Rainier happy hours. It was good! But then, on my evening ride home, I put my phone in my hoodie, rather than jeans pocket, and fell asleep. After a bump in the road somewhere around Lynnwood, the phone fell out, screen cracked, and I’ve been using alternate means of communication since.

Which, if you recall, the wedding was on Saturday. This was Tuesday. It was… inconvenient. This ride is clearly the one that has had the most power over my life and communications. I do not like the evil sway this ride demonstrated, but goddamn do I respect it.