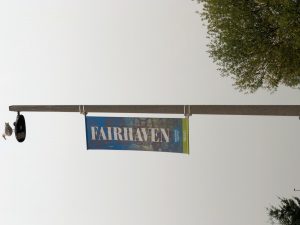 Fairhaven is a boutique area with a deeply strange history.

At the south end of Bellingham, once it’s own town, it feels so much like an advertisement for every type of gentrification-signifying business that it lapses into self-parody.

Bellingham is a quintessentially Pacific-Northwest sort of place. Pushing 90,000 residents in the city proper, it’s too big to simply be a rural college town or removed hipster enclave, but is still smaller than about half the towns in the Puget Sound corridor. It’s wealthier than your Spokanes and Ellensburgs, but still more working class and less yippie than Bend. Like many towns in the Northwest it is famously white and not sure what to do about that. It’s downtown has two of every good or service you need and then 2,345 bars and marijuana dispensaries. There are maybe four buildings that could be called “tall,” with the tallest topping out at fourteen stories and looking hideously pixelated, like something a giant wolf would destroy. Still, Bellingham as a whole is pleasant. It’s idiosyncrasies have largely seemed to remain intact in the years since I lived there, even as new wrinkles appear.

If Bellingham is pleasant, the Fairhaven district is aggressively pleasant. It has in place very strict architectural rules so that all the new growth looks like the old growth. This isn’t necessarily bad since it has allowed the area to boom; were those rules not intact the NIMBYs would stall any development whatsoever.

To many younger locals, Fairhaven serves as a punchline. It was where the rich old people went for too-expensive tea and crumpets, because of course there’s a tea-and-crumpets shop. It was where you took your parents or grandparents. Class is definitely an element here; while the downtown has recently taken on some tastefully upscale restaurants, for a long time if you wanted “fancy” in Bellingham, you went to Fairhaven. Everything is quaint enough that even the nationally respected bookstore and a bar called Dirty Dan’s feel like detached nods to culture and debauchery, rather than manifestations of either. 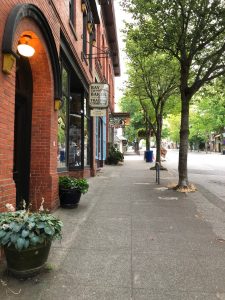 But this haven (heh) for tourists and retirees started as a port-of-call and remains the hub for out-of-town transit into Bellingham. Unless you’re taking the Bolt Bus, which for some reason drops you off in a maze of malls in the north end of the city, your public-transit journey into the City of Subdued Excitement probably dropped you in Fairhaven. Walking Harris Avenue from the main business district to Fairhaven Station, there are a series of historical plaques that look like gravestones and hint at a bizarre and violent history.

A lot of things seemed to happen in 1890, and judging by these plaques, all of them were bad.

There’s also a sense of a town trying to assert it’s own importance, grasping at celebrity sightings even a hundred years ago.

There’s a lot of just dark, objectively bizarre stuff commemorated on your way to the Amtrak station, largely unrelated to each other and devoid of context.

I’m not even posting half of them– but if you want to know where Matthew was cut in two by a street car, it’s pretty close to where there was once a picnic with fiddle music (for dancing) and not too far from the spot where Officer Phil DeFries was shot at 23 times. Apparently the assailant was a bad shot, since that plaque is dated 1899-1905. Did Officer DeFries have a standing “get shot at” date and hence return to that exact spot, narrowly avoiding quicksand? Or is that how long DeFries lived– being the only police officer in the history of the U.S. to serve from birth until the age of six?

The one connecting through line: 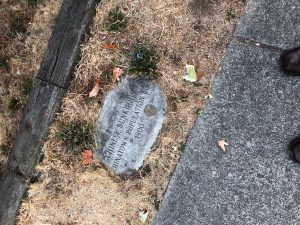 . . .is both predictable and depressing. It’s the racism against and mistreatment of Chinese workers and immigrants. 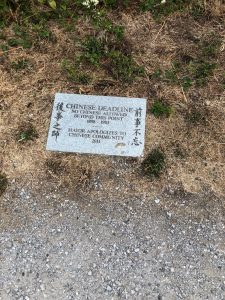 You’ll notice that it wasn’t until 2011 that the city addressed this history with an apology. Kinda took a while. But it’s a stark reminder that very rarely is a town predominately white simply because of benign self-selection. Just like there’s a reason Tacoma doesn’t have a Chinatown and Seattle’s Central District and South End weren’t predominately black by coincidence, Bellingham’s current politics, demographics, and struggles are informed by a history of institutional racism and individual prejudice.

That it manifests now as aggressive pleasantness is hardly a mystery; once you can turn everything into an argument about aesthetics and politeness it is easy to take the teeth out of any real protest.

Still, those plaques are there, illustrating a history both uniquely bizarre and depressingly familiar. Like the breath of an elephant that turns out to be a garbage dump.