The corner of 3rd and Pine is extremely urban, but each of the businesses at its four corners could plausibly be in a different city. 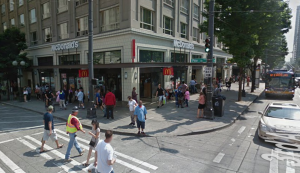 This McDonald’s is the business that you’re likely most familiar with. We covered it here. The walk up window is clutch.

My last visit: I was still hungover late in the day, going to a fancy cocktail party in Fremont. I got off the train, and I needed sustenance. It took me a long time to get it—they lost my order, and then gave me the wrong thing, and we had to start over, amid a symphony of human chaos and a suspicious spill on the floor in the dining area—but this place saved my life. 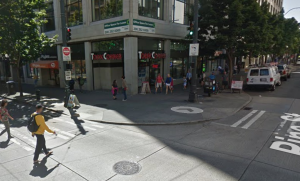 TobacCorner has one of the worst names of any business I have ever encountered. I can’t speak to the quality of the cigars. The inside is oddly serene—a sharp contrast with the sidewalk—and air conditioned.

My last visit: The only time I went into TobacCorner, three years ago, I bought cigars for me and my band when my bass player’s wife gave birth to their first child, a girl. They were the cheapest cigars they had. The cigars were terrible. 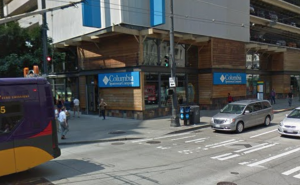 Macy’s realized, after decades of lazy, intertial foolishness, that a site in the middle of the densest part of the Pacific Northwest, and adjacent to 75% of the major transit lines in the region’s largest urban area, was a great place to lease some retail. Thus, Columbia Sportswear’s flagship store moved in on the ground floor of the Bon Marche parking garage.

Unfortunately, they did not realize that a parking garage in the same location is a complete waste of space.

The newest entry to the 3rd and Pine streetscape is very nice, as all the other Victrolas are; the people working who served me this morning as I wrote part of this post were also very nice. This is a place that has practically begged for a good coffee shop for years, and I’m glad it’s finally there. (Macy’s somehow fucked up this corner also, with a series of frightening, terrible sandwich shops.) It was positively serene. People were studying, typing, having business meetings, and other coffee shop type stuff.

The place is weird, though. I felt like a mannequin, since the place used to be a display window, and then a lunch counter, and there are a ton of people outside. The ones standing still will sometimes stare, and the people walking by fast sometimes gawked at me, as if they’d never seen a white man drinking a latte before.

Also, there is an espresso bar behind the espresso bar enclosed in glass. I think it is a training facility for new Victrola hires, and the baristas at shops that Victrola wholesales for. That is extremely weird. I mean, not the part about training—I went to more than one barista training facility during my coffee career—but the museum glass. It adds to the whole voyeuristic vibe of the place.

Strangest of all, the place is the lobby of an Amazon office. There are two receptionists as you come in the front door, under a giant Amazon sign, and the office building’s security guard. The place trys to split the difference between a department store, a Class A office lobby, a fancy coffee shop, and a bus station. It does not wholly succeed at any of those things, and it kind of freaked me out.

My last visit: I already told you: this morning. Pay attention.