The musical guest, NIRVANA, had just released their third LP, In Utero, a few days before.

The band and the Chuck Wagon got to know each other in Nirvana’s green room before the show.

What follows is a partial transcript of the conversation between the Seattle Rock Legends™ and Sir Charles. 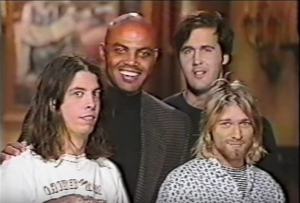 DAVE GROHL is passing a joint to PAT SMEAR. Someone knocks on the door.

KRIST NOVOSELIC: I got it.

BARKLEY: I don’t do drugs.

BARKLEY: Shit, what are you talking about? Pot’s not drugs? You must be on pot to think like that.

NOVOSELIC: You want a beer?

BARKLEY: Hey, you got a hole in your jeans. Don’t know if you noticed.

COBAIN: You must know Michael Jordan.

COBAIN: That’s cool. You guys ever hang out? What’s he like?

BARKLEY: What the hell, man? Why would you say that?

BARKLEY: Mike just beat me in the Finals. Two months ago.

GROHL: You sure you don’t want some weed?

BARKLEY: No thanks. So you guys do rock?